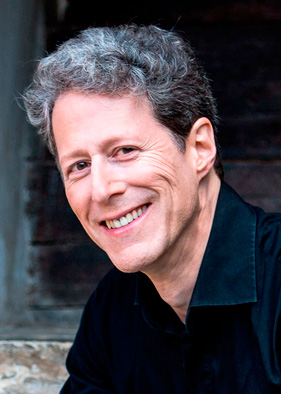 The Symphonova is the brainchild of Shelley Katz. He first dreamed of it in 1989 when employed as StudienLeiter and Kappelmeister at the opera house in Koblenz, and since then has been working on its conceptualisation and design alongside his eclectic career as a pianist, conductor, composer and music-technologist.

Born in Canada, Shelley graduated from the Julliard School where he studied piano under Nadia Reisenberg. He worked under eminent conductors including Bernstein and Oszawa, and for four years under Skrowaczewski as the pianist in the New York Contemporary Ensemble. After moving to Germany, Shelley worked as a conductor and Studienleiter at the Staatstheater Mainz, the Theater der Stadt Koblenz, as solorepetitor at the Deutsche Oper am Rhein and as conductor of the Duisburg Studio Orchestra.

Shelley developed close performance and recording relationships with some of the world’s greatest singers, including tenor Nikolai Gedda, with whom he toured throughout Europe for three years, with soprano Dame Gwyneth Jones, recording ‘O Malvina’ for Deutsche Gramophone, and with Altus Jochen Kowalski, recording Lieder by Mozart, Beethoven and Schumann for Cappriccio. Together with soprano Dagmar Schellenberger, Shelley recorded Blumenlieder by Robert Stolz for CPO, and with bass-baritone Jonathan Veira Forgotten Memories, Of Fire and Dew by John Jeffries for Somm Recordings. His discography also includes Songs of Canada for the Canadian Heritage Society together with soprano Diana Gilchrist, and the recording for a Unicef Gala for Koch/Schwann with Baritone Eugene Holmes and soprano Bonnita Glenn. Shelley also assisted conductor Edo De Waart in the preparation for the first recording of Die Gezeichneten by Schreker for the Marco Polo label. Solo recordings include Bach’s Goldberg Variations and piano works by Canadian composers From Molt to McPhee for the Canadian Heritage Society.

Shelley has performed as an accompanist and in chamber-music concerts in leading festivals and venues worldwide, including the Wigmore Hall, St. John’s Smith Square and Purcell Room in London, and in a performance for Her Majesty Queen Elizabeth II. His many appearances include the Musikverein in Vienna, and in Berlin at the Bellevue Castle, the Staatsoper, the Apollo Saal, the Deutsche Oper, the Hebbel Theater, the Sommerfestspiel and the Brandenburg Dom. Distinguished performances in Germany also include the exclusive Markgraflichen Theatre in Bayreuth, the Staatsoper in Munich, the Staatsoper and Konzert Saal in Hamburg, the first lieder abend at the Semper Oper in Dresden after its renovation and the Alte Oper in Frankfurt. Shelley has also performed in New York’s Carnegie Hall, Montreal’s Place des Arts, Lisbon’s Teatro Nacional, the Isola di San Giorgio in Venice, at the Prague’s Spring Festival and in Russia at Moscow’s Kremlin Armory (broadcast on Russian National Television) and at the Rachmaninoff Concert Hall. Performances also include the Concertgebouw in Amsterdam, the Hagia Sophia in Istanbul, the Nagoya Metropolitan Art Space and Suntory Hall in Tokyo, Barcelona’s National Concert Hall and the Concert Hall in Santiago del Compostello.

Pursuing his interest into new technologies for ultra-high-fidelity sound reproduction and gestural control of artificial systems, Shelley completed a PhD through the Ton-Meister (audio engineering) program at the University of Surrey. His thesis examines rule-based expression in computer-mediated performances of orchestral excerpts from romantic opera. He is the holder of several granted patents in loudspeaker related technologies, and designed the highly-acclaimed Podium Sound loudspeakers, the only audiophile quality, passive flat-panel loudspeakers in the world.

As a composer, Shelley has written incidental music, music theatre, symphonic works and chamber music. Commissions include the oratorio to those on His left for two actors, soprano, baritone, choir and orchestra, commissioned for its premiere performance in Eastbourne and supported by the city (with subsequent performances in both the UK and Germany), Drei Jüdische Lieder for soprano and orchestra commissioned by the city of Duisburg in commemoration of the 50th anniversary of Kristal Nacht, and The world’s greatest national anthems in two minutes or less commissioned by the Dresdner Bank for an exhibition of political cartoons.

Shelley is a former Visiting Fellow at Wolfson College, University of Cambridge, and Musician in Residence and Choral Conductor at the BISC at Herstmonceux Castle, the overseas undergraduate college of Queens University, Canada.